Disclaimer: while I am probably 25% Appalachian by blood and lived there for a bit as a small child, I really know diddly squat about the region. But if my Appalachian contacts are to be believed, Appalachia is the awesomeist place ever and everywhere else is full of lame strivers. (Note: the majority of people I have talked to, no matter where they are from, like the culture they grew up in.)

So with that in mind, let’s take a look back at the history of Appalachia:

Once upon a time, lots of different groups lived in Britain (and Ireland): 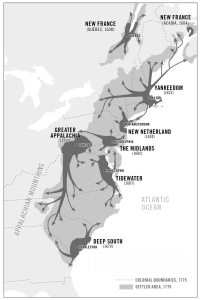 and a great many of them moved to the US, where they spread out, creating broad cultural zones that may have persisted to this day, like Yankeedom and the Deep South. Folks from the borderlands between Scotland (many of whom had apparently first moved to Northern Ireland) skipped over the coastal flat region and headed for the mountains.

You might think that the border between Scotland and England would be a partially-Englishy place that would somewhat resemble the monoraialized English further south, like the guys who settled New England, with the highlanders from further north being the really wild folks, but it turns out that the border was apparently kind of a lawless place because if you committed a crime in Scotland you could just hop over to the English side to avoid prosecution, and vice versa. So I hear, anyway. So instead of being, like, half manorialized, the border was more like anti-manorialized.

The first trickle of Scotch-Irish settlers arrived in New England. Valued for their fighting prowess as well as for their Protestant dogma, they were invited by Cotton Mather and other leaders to come over to help settle and secure the frontier … The Scotch-Irish radiated westward across the Alleghenies, as well as into Virginia, North Carolina, South Carolina, Georgia, Kentucky, and Tennessee.[37] The typical migration involved small networks of related families who settled together, worshipped together, and intermarried, avoiding outsiders.[38]

… Most Scotch-Irish headed for Pennsylvania, with its good lands, moderate climate, and liberal laws.[citation needed] … Without much cash, they moved to free lands on the frontier, becoming the typical western “squatters”, the frontier guard of the colony, and what the historian Frederick Jackson Turner described as “the cutting-edge of the frontier.”[39]

… With large numbers of children who needed their own inexpensive farms, the Scotch-Irish avoided areas already settled by Germans and Quakers and moved south, down the Shenandoah Valley, and through the Blue Ridge Mountains into Virginia.[citation needed] These migrants followed the Great Wagon Road from Lancaster, through Gettysburg, and down through Staunton, Virginia, to Big Lick (now Roanoke), Virginia. Here the pathway split, with the Wilderness Road taking settlers west into Tennessee and Kentucky, while the main road continued south into the Carolinas.[41][42]

The name “Appalachia,” btw, is one of the oldest place names in the US, hailing from the name of an Indian tribe or something that made it onto a map way back in the 1500s.

Anyway, these folks moved to the mountains, probably because they were rough-and-tumble sorts who could survive out in the harsh wilderness where more wilting types fainted from the lack of square corners and nicely plowed fields and then got killed by Indians. Also according to Wikipedia:

Because the Scotch-Irish settled the frontier of Pennsylvania and western Virginia, they were in the midst of the French and Indian War and Pontiac’s Rebellion that followed.[43] The Scotch-Irish were frequently in conflict with the Indian tribes who lived on the other side of the frontier; indeed, they did most of the Indian fighting on the American frontier from New Hampshire to the Carolinas.[44][45]

Mountains tend to remain wilderness areas long after flatlands are settled and conquered, you you had to be tough to survive in the mountains. So the Appalachians attracted and rewarded a particular sort of person who could survive in them.

If you want to know more about the recent history/culture of West Virginia, I recommend “When I was Young in the Mountains,” unless you don’t like picture books.

I get the impression that the Appalachians were basically left alone most of the time (except for getting invaded during the Civil War, which was pretty sucky since there weren’t even a lot of slaves in Appalachia and the folks there weren’t really in favor of secession, they just got dragged along by the rest of their states. [As I mentioned yesterday, Appalachia seceded from Virginia over the issue,] and the occasional issue like the Whiskey Rebellion.)

Being up in the mountains was probably bad for the development of agriculture, both because it is difficult to plow steep hillsides, (especially without having all of your

dirt wash away come the next rainfall,) and also because it was harder to build railways and other transportation networks that could get the crops/produce/meat out of the mountains and down to other markets. Likewise, it was difficult to ship in manufactured goods like factory woven cotton cloth for people to purchase; as a result, the Appalachians were probably rather cut-off from the rest of the expanding economy of the 1800s. I have searched for comparative GDP numbers for the 1800s, but unfortunately found nothing.

Railway lines only really expanded into the area after coal mining became a big deal.

It’s pretty much impossible to talk about the history of Appalachia without talking about coal. Apparently people knew about the coal way back in the 1700s, but it only became a big deal after the Civil War. The massive expansion of the mining industry attracted newly freed blacks from the Deep South and immigrants (mostly Irish but probably also Italians, eastern Europeans, etc.) from the coastal cities. There aren’t a lot of black folks currently in Appalachia, so it looks like they didn’t stick around, but the Irish did.

Coal mining was dangerous, exhausting, terrible work. If you didn’t die in a cave-in or an explosion, there was always miner’s lung. In return for powering the US, miners were paid crap–usually company scrip, only usable in company stores, so that even if they got a raise, the company would just increase the cost of goods at the store. And then there’s the pollution.

Eventually this led to strikes and attempts at unionization, to which the mine owners responded with violence, murdering strikers and assassinating their leaders, which culminated with an “army” of armed miners marching on the mines and Federal troops being called in to put down the “revolt.”

(This is better than the way the British treated their Scottish coal miners, who were literally enslaved for nearly two centuries, but still pretty shitty.)

Anyway, conditions in and around the coal mines gradually improved, until mining became a reasonable way to support a family rather than a death trap. (And if mining wasn’t to your liking, there were garment factories, tobacco farms in the South and steel mills in the North.) It was a time of relative economic well-being–unfortunately, it’s also when mechanization kicked in, and most of the miners became redundant. NAFTA and trade with China killed manufacturing, and the shift away from smoking left tobacco growers with a bunch of plants they could no longer sell.

This has been not good for the local economies.

See that X at the very bottom center of the IQ vs. GDP graph? That’s West Virginia. (The X on the far left is Mississippi.) Kentucky isn’t doing much better, though Tennessee, the third state that falls almost entirely within “Greater Appalachia,” isn’t doing too badly.

While it is true that the graph is practically random noise, West Virginia seems to me to be doing worse than it ought to be. There seems to be a basic sort of “floor” below which few of the states fall–were Appalachia on this floor, per cap GDP would be about 4k higher.

There’s a certain irony to all of this. Like Appalachia, Saudi Arabia contains a vast wealth of fossil fuel. To the best of my knowledge, Saudi Arabia and the other Gulf Oil States have attempted to use their vast wealth to uplift their people and are trying to develop modern, functioning economies that will be able to keep chugging even once the oil dries up. Sure, the Saudi princes get to live like, well, princes, but every one else in Saudi Arabia is probably a lot more comfortable than folks were a few generations back when the primary occupation was nomadic goat herding. (Don’t cite me on that I don’t actually know what the primary occupation in Saudi Arabia was a few generations ago.)

In Appalachia, by contrast, the locals have seen relatively little of the coal wealth (and that after a good deal of violent struggle,) and many areas are still not seeing long-term economic development.

To be fair, the US has tried to uplift the region, eg, LBJ’s War on Poverty, and been fairly successful in some areas. TVA cut flooding, rural electrification brought people lightbulbs, and pretty much everyone these days has a flush toilet and shoes. But many regions of Appalachia are still suffering–and some are doing much worse than they were a generation ago.

E-WV: Agriculture, How the Coal Industry Impoverishes West Virginia, Rolling Stones: Where the Tea Party Rules, Corporate Responsibility in Appalachia: Coal mining costs more per year than it pulls in, Plundering Appalachia, Friends of Coal: A History of Coal in West Virginia, WV History: The Mine Wars 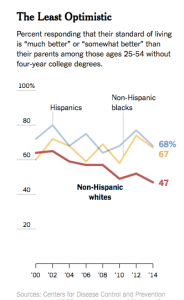 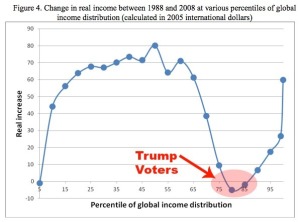