Skip to content
HomeAdoption as Genetic Strategy? Americans, Indians, and the Mongols

If a man adopt a child and to his name as son, and rear him, this grown son can not be demanded back again. …

If a man, who had adopted a son and reared him, founded a household, and had children, wish to put this adopted son out, then this son shall not simply go his way. His adoptive father shall give him of his wealth one-third of a child’s portion, and then he may go. He shall not give him of the field, garden, and house.

This post was inspired by a friend’s question: Can adoption of non-kin be a viable genetic (or memetic) strategy?

The full version of the question was more like, “Liberals are more positive toward interracial marriage, leading to more genetic variation in liberal communities. Could adoption be a similarly viable strategy for Conservatives, by increasing the ethnic diversity of the people who believe in their memetic values?”

Adoption could also work by just increasing sheer numbers of conservatives, even if it does nothing to genetic diversity.

My first thought was, “That sounds a lot like what the Amercan Indians were trying to do when they kidnapped and adopted white children, and I think Genghis Khan did something similar with the children of subjugated peoples.”

These customs stand in contrast to groups that have historically attempted to wipe out their enemy’s children, like the entire rest of the Mongol conquests, so I thought this question worth exploring.

But there’s a lot here that first needs unpacking. For starters, despite what people claim to believe, conservatives actually have very slightly higher interracial marriage rates than whites and are more likely to live in multi-ethnic households.

Let’s get some graphs. 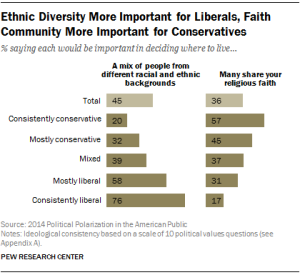 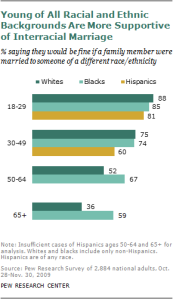 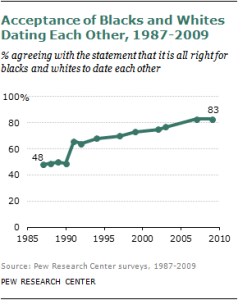 The data is clear: atheists are the most hated minority in the country, followed by gun owners. (I jest; people are actually pretty polite to atheists, and you’re rude to a gun owner at your own risk.)

America’s most prominent ethnic division is actually between “liberals” and “conservatives,” a feature reflected in attitudes toward “gun owners” and “atheists.” Most Ameicans don’t think of this as an ethnic difference (even though it is,) just because they aren’t all that conscious of the different ethnic settlement patterns that influenced the modern political distribution.

Or to put it another way, there isn’t anything magical in the dirt in Massachusetts or South Carolina that has been turning the people there liberal or conservative for the past 300 years or so. The difference is mostly ethnicity–some ethnicities are just more liberal or conservative–but a lot of people (even people who loudly claim that there’s more intraracial than interracial variation,) regard all whites as one great big undifferentiated ethic mass that just happens to hold different opinions in different regions.

The majority of Americans (even the majority of very conservative Americans, however many of those there are,) claim to care more about one’s beliefs (and actions) than about superficial things like skin tone or the geographic origin of one’s ancestors.

Tribalism (the human norm,) states that it is morally correct to overlook differences of opinion within your own group, (family, clan, tribe, nation, ethnic group, ethnie, thede, race, clade, take your pick,) and always side with your group against outsiders.

So Americans are perfectly okay with saying that they would not want to marry someone who holds belief they disagree with, but look askance at saying they have an ethnic preference. (Which explains why, even when people say things that are quite negative about outgroup members, they tend to quite vociferously object that they are not “racist” because their objection is not to the outgroup’s appearances, but to their behaviors.)

But what people say and what they do are different matters. According to Volokh:

Similarly, 9.4 percent of Republicans living in step- or adopted families were in mixed-race households, compared to only 8.8 percent of Democrats in such families. (Again, this small advantage for Republicans is not large enough to be statistically significant).

And looking at all children instead of non-related children,

Unfortunately, I am having difficulty finding statistics on the exact % of conservatives/Republicans who are in mixed-race marriages vs. the % of liberals in mixed-race marriages–we may posit that there is a difference between an interracial couple with three interracial children and a white person who, on their third marriage, marries someone who already has a half-white child, but just eyeballing the data, I don’t think there’s going to be a huge statistical difference.

(The difference between “conservatives” and “Republicans” in the data is due to may conservative blacks and Hispanics not voting Republican.)

If you look only at whites, according to Volokh,

Assuming these numbers are correct…

Of course, these folks would object that it’s not that they don’t like minorities, they just happen not to be around any they’ve fallen in love with. It’s not about superficial skin tones; it’s just something else that happens to be incredibly well correlated with superficial skin tones, like paying exorbitant rents in order to live in neighborhoods without any minorities in them. But those Republicans, dude, they’re like super racist.

What about the numbers on adoption?

The Wikipedia page on Adoption starts out nicely, then descends into gibbering mush. It has, tragically, very little information on non-Western adoption customs, and not as much as I’d hoped for on historical adoptions in the West. For that, we’ll have to search elsewhere.

But we’re still going to make use of it for the stats:

America has about 3 times the adoption rate as the rest of the West, and 15x Australia’s rate!

What’s up with that?

The most commonly given reason for wanting to adopt is infertility, and one of the big drivers of infertility is being overweight, (the other big one is being too old,) so perhaps Americans are just more prone to infertility.

We probably have a larger population of children in orphanages/foster care than the rest of the West, which might have inspired people over time to be more receptive to adoption.

Or perhaps we have a relatively unique view on the idea that family doesn’t have to be blood-related.

International adoptions, though they get a lot of press, are less than 15% of overall adoptions in the US; in Sweden, by contrast, they are over 99.999% of adoptions. (This may be due to few Swedish children being up for adoption.)

Also, according to Wikipedia, only 1.4% of ever-married American women adopt. (What about unmarried women?) So it sounds like the average adopting family adopts 2 or 3 kids.

Unfortunately for our original inquiry, a 2% intermarriage rate is not going to do much, short term, to white genetics.

By contrast, intermarriage may be an effective strategy for forging genetic/memetic alliances among minorities.

An adoption rate of 3%, even if it were confined entirely to conservatives, isn’t doing much to overall numbers. As a memetic strategy, it is also constrained by the fact that political orientation, in adults, is determined largely by a combination of genetic personality factors and random chance.

The Shakers did an experiment along these lines: none (or extremely few) of the Shakers had children, because they didn’t believe in having sex. However, many Shakers adopted children, raising them in Shaker communities. No one forced these children to become Shakers, but it was certainly hoped that they would.

Most of them didn’t, and the Shakers have died out. (Technically, as of 2012, there were three elderly shakers left in Maine.) You just can’t replace yourself though adoption.

So tomorrow, let’s look at some cases where adoption might have played a larger genetic role: the Mongols, the Indians, and if I can find anything interesting on it, ancient Europeans.

7 thoughts on “Adoption as Genetic Strategy? Americans, Indians, and the Mongols”