Skip to content
HomeChimps, Dominance, and the Irony of Riots

The anti-Trump riots/protests going on right now seem at first glance, to be highly counter-productive: most of the rioters live in highly liberal areas, so the majority of people they intimidate, assault, or rob are not Trump supporters, but actually on their own side.

Remember when a black cop shot a black criminal and blacks rioted, looting their own stores, and the criminal’s sister scolded them, telling them to “take that shit to the suburbs” because “we need our weaves!”?

Or when the citizens of Detroit rioted, burning down 2,000 buildings, thus driving out small businesses and the entire middle class base and sending the city into an economic death spiral?

Just as when watching small children run and scream on the playground, I am reminded here of Jane Goodall’s descriptions of chimpanzees, especially their dominance displays. Here is an account of one that went awry:

Just then Flint, six months older than Goblin, came bouncing up and the two children began to play, both showing their lower teeth in the chimpanzee’s playful smile. Flo was reclining nearby grooming Figan; Goblin’s mother, Melissa, was a little farther away, also grooming. It was so peaceful…. All at once a series of pant-hoots announced the arrival of more chimpanzees, and there was instant commotion in the group. Flint pulled away from the game and hurried to jump onto Flo’s back as she moved for safety halfway up a palm tree. I saw Mike with his hair on end beginning to hoot; I knew he was about to display. So did the other chimpanzees of his group–all were alert, prepared to dash out of the way or to join in the displaying. All, that is, save Goblin. He seemed totally unconcerned and, incredibly, began to totter toward Mike. Melissa, squeaking with fear, was hurrying toward her son, but she was too late. Mike began his charge, and as he passed Goblin seized him up as though he were a branch and dragged him along the ground. 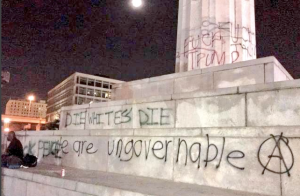 Since you don’t have the benefit of having the entire book in front of you, I’ll explain what’s going on, just in case you’re confused: when two groups of chimps meet, or a male chimp enters a group of other chimps, it’s very normal for the males to engage in dominance displays (or just “display,” as Jane puts it.) These displays are aggressive and involve a lot of running around, waving and shaking branches at each other, and making noise, but don’t generally involve actual violence. By making it clear which chimp is the strongest, weaker chimps simply back down without getting into an actual fight.

When the males are about to display, all of the females, being smaller and weaker, grab their kids and get out of the way. Chimpanzee aggression is not normally aimed at chimpanzee children, who of course are helpless against a full-grown male. However, in this case, little Goblin didn’t realize what was going on, and Mike, in his all-consuming rage at the newcomers, didn’t realize that he had grabbed Goblin instead of a tree branch.

An then the normally fearful, cautious Melissa, frantic for her child, hurled herself at Mike. It was unprecedented behavior, and she got severely beaten up for her interference, but she did succeed in rescuing Goblin–the infant lay, pressed close to the ground and screaming, where the dominant male had dropped him. Even before Mike had ceased his attack on Melissa the old male Huxley had seized Goblin from the ground. I felt sure he too was going to display with the infant, but he remained quite still, holding the child and staring down at him almost, it seemed in bewilderment. Then as Melissa, screaming and bleeding, escaped from Mike, Huxley set the infant on the ground. As his mother hurried up to him Goblin leaped into her arms…

Normally, small infants are shown almost unlimited tolerance from all other members of the community; it almost seem as though the adult male may lose many of his social inhibitions during his charging display.”

Note that Mike is not normally aggressive toward infants–at another time, when Goblin got lost, Mike actually rescued him and stayed with him until Melissa returned for him. Chimps don’t really pair bond and so they don’t have “fathers” who care for their young the way their mothers do, devotedly, for years, but all of the males in a troop are likely to be related to the young in the troop in some manner, either as brothers or uncles or cousins or fathers, and so quite sensibly they do not generally try to kill their own relatives.

Mike’s urge to display in front of these newcomers was so strong that it completely overwhelmed his normal senses. The aggressive instinct is no mere luxury–showing that he is stronger than the other chimps is how Mike keeps his own troop safe. 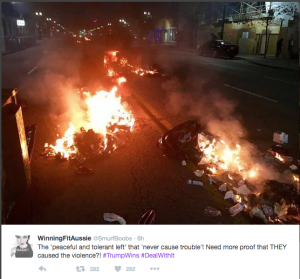 There is a saying that “Democracy is war by other means.” The two sides line up, count their troops, and declares the side with more soldiers the winner.

Well, Hillary Clinton’s soldiers have refused to accept the headcount. They refuse to accept their new alpha chimp, and they are out there, rioting, protesting, displaying their strength. It doesn’t matter whether they display by grabbing a branch, an infant, or a smashed window. It doesn’t matter if they loot their own neighborhoods and light their own cars on fire. The message is still the same: We are Strong. We are violent. Don’t fuck with us.

As I noted before, when the chimps Jane was studying in the Gombe split into two groups, the chimpanzees of the Kahama region of the Gombe Stream went to war against the chimps of Kasakala in 1974:

The two [groups] had previously been a single, unified community, but by 1974 researcher Jane Goodall, who was observing the community, first noticed the chimps dividing themselves into northern and southern sub-groups.[2] …

The first outbreak of violence occurred on January 7, 1974,[4] when a party of six adult Kasakela males attacked and killed “Godi”, a young Kahama male …

I have the luxury of reading this account after already hearing, at least vaguely, that chimps wage war on each other. To Jane–despite having observed chimpanzee belligerence for years–it came as a surprise:

The outbreak of the war came as a disturbing shock to Goodall, who had previously considered chimpanzees to be, although similar to human beings, “rather ‘nicer’” in their behavior.[7] Coupled with the observation in 1975 of cannibalistic infanticide by a high-ranking female in the community, the violence of the Gombe war first revealed to Goodall the “dark side” of chimpanzee behavior.[7] She was profoundly disturbed by this revelation; in her memoir Through a Window: My Thirty Years with the Chimpanzees of Gombe, she wrote:

“For several years I struggled to come to terms with this new knowledge. Often when I woke in the night, horrific pictures sprang unbidden to my mind—Satan [one of the apes], cupping his hand below Sniff’s chin to drink the blood that welled from a great wound on his face; old Rodolf, usually so benign, standing upright to hurl a four-pound rock at Godi’s prostrate body; Jomeo tearing a strip of skin from Dé’s thigh; Figan, charging and hitting, again and again, the stricken, quivering body of Goliath, one of his childhood heroes. [8]” 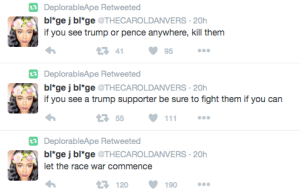 It is worrying indeed that we have drifted so far apart that liberals are violently displaying against conservatives, treating them like an entirely separate tribe to be beaten, dismembered, and destroyed.

And especially foolish since conservatives have the vast majority of guns and ammunition.

28 thoughts on “Chimps, Dominance, and the Irony of Riots”