I’ve been thinking of doing some form of regular “comment of the week” to highlight particularly good comments, along with “most interesting things I read elsewhere.” And sure, it can be an Open Thread, too, though really, you’re pretty free to treat every thread like an Open Thread. :) This would be in addition to the regular posts, not in place of them. Which day do you think would be better: Wedensday or Saturday?

So this week’s Comment of the Week award goes to Ertuğrul Aşina, for adding yet more information to my post on the Turkic Peoples:

There are Turks in Turkey, like my family, that still uses their Asian family names. Mine are called Aşinas, which probably is a corrupted form of Ashina Clan and Meteçanyus which is likely to refer to Moduchanyu. … My paternal family hails from a pretty isolated town of northern Turkey, where almost everyone looks like blonde Asians and talk in a manner that rest of the Turks don’t really understand easily. …

In other news, I read a fabulous interview with Napleon Chagnon, Blood is their Argument. (Also staring Steven Pinker, Richard Wrangham, Daniel C. Dennett, David Haig, and Richard Dawkins.) Chagnon wrote Yanomamo: The Fierce People, in which he showed–via extensive demographic data–that the Yanomamo tribesmen who had the most children were also the ones who had killed the most other people.

For this significant accomplishment, of course, he has been “vilified by other anthropologists, condemned by his professional association (which subsequently rescinded its reprimand), and ultimately forced to give up his fieldwork. Throughout his ordeal, he never wavered in his defense of science. In 2012 he was elected to the National Academy of Sciences.”

But back to the interview:

STEVEN PINKER:  You’re one of the last of the classical ethnographers, someone who goes in to study a relatively uncontacted, technologically traditional hunting people.  That’s not the way a lot of anthropology is done these days. I remember a conversation at a faculty lunch with a professor of anthropology, and I asked him what tribe he studied. He said he studied the nuclear engineers of Los Alamos Labs in New Mexico.

I believe he is referring to Hugh Gusterson’s Nuclear Rites: A Weapons Laboratory at the End of the Cold War, thought it is actually set at Lawrence Livermore National Laboratory. (That is a really easy thing to mix up.)

… Can you just tell us what’s it like to go out and study an uncontacted people in the middle of the Amazon Rainforest? Do you pack a steamer trunk full of bug spray and peanut butter, and hire someone to drop you off and say, “Pick me up in six months?”

NAPOLEON CHAGNON:  Well, remarkably, Steve, that’s pretty much the way some of it happened. But when I first walked into the Yanomamö village thinking I was going to do the perfunctory one-year field research or maybe less, go back to my university, write my doctoral dissertation, publish a book maybe, after two or three years of thinking about it, then return to the tribe ten years later and do the expected thing about,  “Woe is me, what has the world and technology done to my people?” But the minute I walked into my first Yanomamö village I realized that I was witnessing a really precious thing, and I knew I would have to come back again and again, and I did.

There is too much great information in this interview to excerpt. You’ll just have to RTWT. 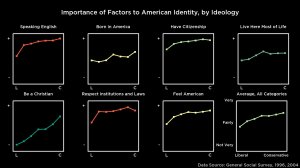 Since this is the first week I’m trying this, I’ll stop here with the links/graphs and open the floor to discussion:

I don’t think it mere coincidence that all of the men in the picture above are, well, men. Aside from Jane Goodall and HBDChick, are there any significant [living] women doing ground-breaking work in anthropology/human evolution/genetics/related fields?