I recently received a few IQ-related questions. Now, IQ is not my specialty, so I do not feel particularly adequate for the task, but I’ll do my best. I recommend anyone really interested in the subject read Pumpkin Person’s blog, as he really enjoys talking about IQ all the time.

I suppose it depends on what you want the test for. Curiosity? Diagnosis? Personally, I suspect that the average person isn’t going to learn very much from an IQ test that they didn’t already know just from living (similarly, I don’t think you’re going to discover that you’re an introvert or extrovert by taking an online quiz if you didn’t know it already from interacting with people,) but there are cases where people might want to take an IQ test, so let’s get searching.

Pumpkin Person speaks highly of the Wechsler Intelligence Scales (it comes in adult and child versions.) According to Wikipedia:

The Wechsler Adult Intelligence Scale (WAIS) is an IQ test designed to measure intelligence and cognitive ability in adults and older adolescents.[1] The original WAIS (Form I) was published in February 1955 by David Wechsler, as a revision of the Wechsler–Bellevue Intelligence Scale, released in 1939.[2] It is currently in its fourth edition (WAIS-IV) released in 2008 by Pearson, and is the most widely used IQ test, for both adults and older adolescents, in the world.

Since IQ tests excite popular interest but no one really wants to pay $1,000 just to take a test, the internet is littered with “free” tests of questionable quality. For example, WeschlerTest.com offers “free sample tests,” but the bottom of the website notes that, “Disclaimer: This is not an official Wechsler test and is only for entertainment purposes. Any scores derived from it may not accurately reflect the score you would attain on an official Wechsler test.” Here is a similar wesbsite that offers free Stanford-Binet Tests.

I am not personally in a position to judge if these are any good.

It looks like the US military has put its Armed Services Vocational Aptitude Battery online, or at least a practice version. This seems like one of the best free options, because the army is a real organization that’s deeply interested in getting accurate results and the relationship between the ASVAB and other IQ tests is probably well documented. From the website:

The ASVAB is a timed test that measures your skills in a number of different areas. You complete questions that reveal your skills in paragraph comprehension, word knowledge, arithmetic reasoning and mathematics knowledge. These are basic skills that you will need as a member of the U.S. military. The score you receive on the ASVAB is factored into your Armed Forces Qualifying Test (AFQT) score. This score is used to figure out whether you qualify to enlist in the armed services. …

The ASVAB was created in 1968. By 1976, all branches of the military began using this test. In 2002, the test underwent many revisions, but its main goal of gauging a person’s basic skills remained the same. Today, there is a computerized version of the test as well as a written version. The Department of Defense developed this test and it’s taken by students in thousands of schools across the country. It is also given at Military Entrance Processing Stations (MEPS).

Naturally, each branch of the United States armed services wants to enlist the best, most qualified candidates each year. The ASVAB is a tool that helps in the achievement of that purpose. Preparing to take the ASVAB is just one more step in the journey toward your goal of joining the U.S. armed services. …

Disclaimer: The tests on this website are for entertainment purposes only, and may not accurately reflect the scores you would attain on a professionally administered ASVAB test.

The blog Random Critical Analysis gives a thorough rundown of the correlation between ASVAB and IQ scores (they are highly correlated) along with the SAT and ACT.

Additionally, there are a couple of tests linked here in Lipscomb’s Intelligence Course Lab : Classical IQ Test from Psychology Today and IQTest.com.

Drawing a page from Pumpkin Person’s book, I recommend taking several different tests and then comparing results. Use your good judgment about whether a particular test seems reliable–is it covered in ads? Does random guessing get you a score of 148? Did you get a result similar to what you’d expect based on real life experiences?

2. Besides that I wanted to ask you how much social class and IQ are correlated? 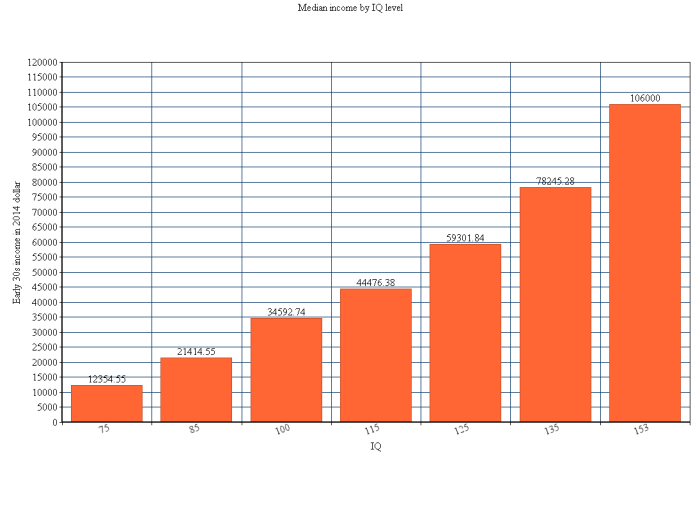 With thanks to Pumpkin Person 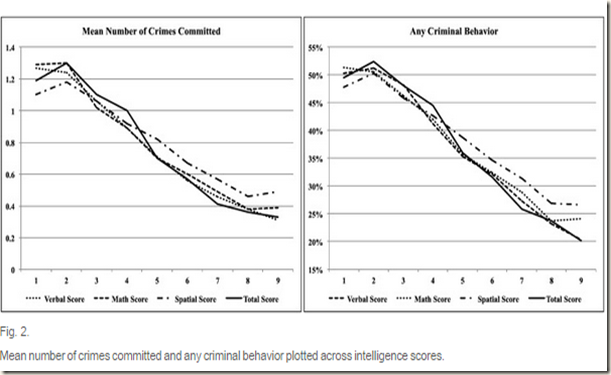 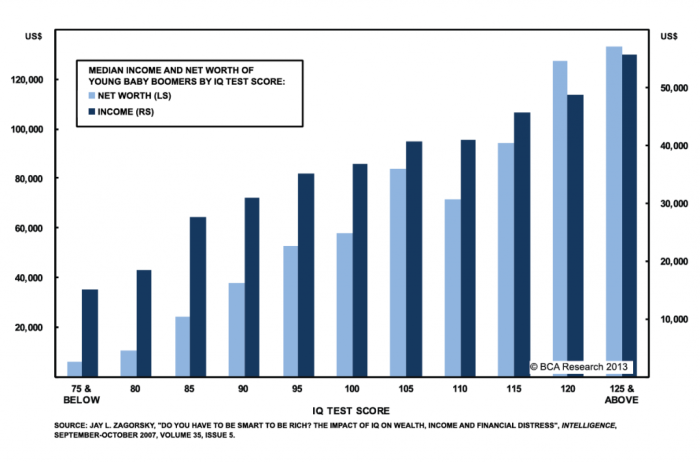 When dumb children are born to rich people, they tend to do badly in life and don’t make much money; they subsequently sink in social status. When smart children are born to poor people, they tend to do well in life and rise in social status. Even in societies with strict social classes where moving from class to class is effectively impossible, we should still expect that really dumb people born into wealth will squander it, leading to their impoverishment. Likewise, among the lower classes, we would still expect that smarter low-class people would do better in life than dumber ones.

This is all somewhat built into the entire definition of “IQ” and what people were trying to measure when they created the tests.

I haven’t read Clark’s book, but I’m sure the pathetic amount of research I can do here would be nothing compared to what he’s amassed.

There are a number of studies on assortative mating and IQ, eg: Spouse similarity for IQ and personality and convergence:

A similar pattern of spousal association for IQ scores and personality traits was found in two British samples from Oxford and Cambridge. There was no indirect evidence from either sample to suggest that convergence occurred during marriage. All observed assortative mating might well be due to initial assortment.

This article reviews the literature on assortative mating for psychological traits and psychiatric illness. Assortative mating appears to exist for personality traits, but to a lesser degree than that observed for physical traits, sociodemographic traits, intelligence, and attitudes and values. Concordance between spouses for psychiatric illness has also been consistently reported in numerous studies. This article examines alternative explanations for such observed concordance and discusses the effects of assortative mating on population genetics and the social environment.

In the Minnesota Twin Family Study, assortative mating for IQ was greater than .3 in both the 11- and 17-year-old cohorts. Recognizing this, genetic variance in IQ independent of SES was greater with higher parental SES in the 11-year-old cohort. This was not true, however, in the 17-year-old cohort. In both cohorts, people of higher IQ were more likely to have ‘married down’ for IQ than people of lower IQ were to have ‘married up’. This assortative mating pattern would create greater genetic diversity for IQ in people of higher IQ than in people of lower IQ. As IQ is associated with SES, the pattern could be one reason for the observation of greater genetic variance in IQ independent of SES with greater parental SES in several samples. If so, it could block upward social mobility among those already in lower-SES groups. I discuss possible involved mechanisms and social implications.

The role of personality and intelligence in assortative mating:

Assortative mating is the individuals’ tendency to mate with those who are similar to them in some variables, at a higher rate than would be expected from random. This study aims to provide empirical evidence of assortative mating through the Big Five model of personality and two measures of intelligence using Spanish samples. The sample consisted of 244 Spanish couples. It was divided into two groups according to relationship time. The effect of age, educational level and socioeconomic status was controlled. The results showed strong assortative mating for intelligence and moderate for personality. The strongest correlations for Personality were found in Openness, Agreeableness and Conscientiousness.

The role of personal preference as an active process in mate selection is contrasted with the more passive results of limitations of available mates due to social, educational, and geographical propinquity. The role of personal preference estimated after removing the effects of variables representing propinquity was still significant for IQ and Eysenck’s extraversion-introversion and inconsistency (lie) scales, even though small.

Some argue that the high heritability of IQ renders purely environmental explanations for large IQ differences between groups implausible. Yet, large environmentally induced IQ gains between generations suggest an important role for environment in shaping IQ. The authors present a formal model of the process determining IQ in which people’s IQs are affected by both environment and genes, but in which their environments are matched to their IQs. The authors show how such a model allows very large effects for environment, even incorporating the highest estimates of heritability. Besides resolving the paradox, the authors show that the model can account for a number of other phenomena, some of which are anomalous when viewed from the standard perspective.

4. Are upper class people genetically more intelligent? Or is there an effect of regression to the mean and all classes have about equal chances to spawn high IQ people?”

Stephen Hsu has a relevant post on the subject: Assortative mating, regression and all that: offspring IQ vs parental midpoint:

…James Lee, a real expert in the field, sent me a current best estimate for the probability distribution of offspring IQ as a function of parental midpoint (average between the parents’ IQs). James is finishing his Ph.D. at Harvard under Steve Pinker — you might have seen his review of R. Nesbitt’s book Intelligence and how to get it: Why schools and cultures count.

The results are stated further below. Once you plug in the numbers, you get (roughly) the following:

Assuming parental midpoint of n SD above the population average, the kids’ IQ will be normally distributed about a mean which is around +.6n with residual SD of about 12 points. (The .6 could actually be anywhere in the range (.5, .7), but the SD doesn’t vary much from choice of empirical inputs.)…

Read Hsu’s post for the rest of the details.

We can look at the effects of parental SES on SAT Scores and the like: 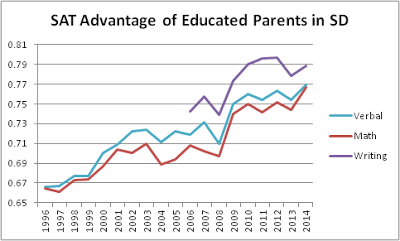 Hope that has been useful.