Note: This post contains a lot of oversimplification for the sake of explaining a few things. (Yes, I am still meditating on the greater Asian clade.)

Imagine you’re driving down a long highway that stretches from Nigeria to Beijing, passing through Berlin and New Delhi. In reality this route takes some large twists and turns, but we’re drawing it as a straight line, for all maps must simplify to be useful.

As you drive along, you pass many houses along the way–sometimes just a few clustered next to the highway, sometimes small towns, sometimes megalopolises with billions of people.

Our drive begins in one such megalopolis, that of Sub-Saharan Africa (SSA.) Here we meet people like Queen Anna Nzinga, author Chinua Achebe, and–though they have traveled far abroad–African Americans like Oprah Winfrey and Martin Luther King.

Though thousands of different languages are spoken by the thousands of different groups throughout SSA, we may still note a certain physical similarity among them–dark skin perfectly adapted to the equator’s strong sun, dark eyes, and tightly curling hair. While there is a tremendous amount of variety here–probably the most of any megalopolis in the world–they are also, quite clearly, related. You don’t have to go measuring skulls to figure that out.

But as we drive north, the houses thin out. Suddenly we are in a zone with almost no people–an enormous desert: the Sahara.

We speed through this harsh, empty landscape on a starry night, spotting only a few camels in the distance. We’re lucky we have a full tank of gas and several more in the trunk–for all but the most intrepid of our pre-automobile ancestors, this desert was nigh impassible, a vast barrier to human movement.

Finally we reach the vast inland sea of the Mediterranean, and the beginning of our second megalopolis. Most of the people here, from Berbers to Egyptians, have their own distinct look, more similar to their neighbors from the Middle East and Southern Europe than their neighbors to the south, across the inhospitable expanse of sand.

While there are many different countries and languages, no clear phenotypic line separates the people of Northern Africa, the Middle East, southern Europe, or northern Europe. Skin pales, hair lightens and becomes wavy, eyes turn a variety of hues as one nationality melts into the next. North-central Europe is the only place in the world where blue/green/hazel eyes and blond hair are common in adults; even in Wales, dark hair is dominant.

We hang a right through Turkey, Iran, Pakistan, and India, teeming with people.  Here again, though the people change and there are barriers like the Thar Desert, we find no harsh, nigh-impenetarable breaks like the Sahara.

Then, suddenly, we run smack into a wall, a natural wall of majestic proportions: the Himalayas. Beyond lie the Tibetan Plateau, Gobi Desert, and the vast emptiness of the Asian steppe. If this land was ever densely populated, generations of marauding steppe warriors have wiped them out. We see a few people here–aptly named Tibetan lamas, flocks of sheep grazing beside a scattering of yurts. Mongolia holds the distinction of being the world’s least densely populated independent country. (Ice-covered Greenland is even less dense, but owned by Denmark.)

Finally we pass beyond the shadow of the Great Khan’s memorial and into the valley of the Yellow River, where we find our third megalopolis: east Asia.

There is notably less genetic diversity here than in the first megalopolis–indeed, 93% of Han Chinese share a particular variety of the EDAR allele:

A derived G-allele point mutation (SNP) with pleiotropic effects in EDAR, 370A or rs3827760, found in most modern East Asians and Native Americans but not common in African or European populations, is thought to be one of the key genes responsible for a number of differences between these populations, including the thicker hair, more numerous sweat glands, smaller breasts, and dentition characteristic of East Asians.[7] … The 370A mutation arose in humans approximately 30,000 years ago, and now is found in 93% of Han Chinese and in the majority of people in nearby Asian populations.

Here, too, skin tones vary from north to south, though not as greatly as they do closer to the Greenwich Meridian. Most people have dark eyes, slim frames, and straight, smooth black hair.

Here in the megalopolis made famous by Beijing, Shanghai, Hong Kong, Seoul, and Tokyo, we have come to the end of the–first round–of our journey. From Africa to Asia, we have found three vast areas filled with people, and two major barriers which–though not completely impassible–have hindered humanity’s footsteps over the millennia.

People sometimes try to claim that human races do not exist simply because edge cases exist, small, scattered groups which possess a mixture of genes common to both Sub-Saharan Africans and Caucasians, Caucasians and Asians. And these groups do in fact exist, and are fascinating in their own rights. But these groups are also small, often living in extremely harsh, forbidding lands where few humans can survive (The inhabitants of the Himalayas and Tibetan plateau, I note, actually carry a gene that helps them survive at high altitudes which they received via an ancestor’s dalliance with a Denisovan hominin–the Denisovans were cousin to the Neanderthals and lived in Asia long before Homo Sapiens. No one else in the world carries this gene, so if you don’t have it, good luck living up there!)

But the vast, vast majority of the world’s people do not live in these harsh and unforgiving lands. They live clustered together in the enormous population centers, continually mixing, migrating, churning, and conquering each other, not people thousands of miles off. The concept of race stems from this basic observation of the geography of human settlements. 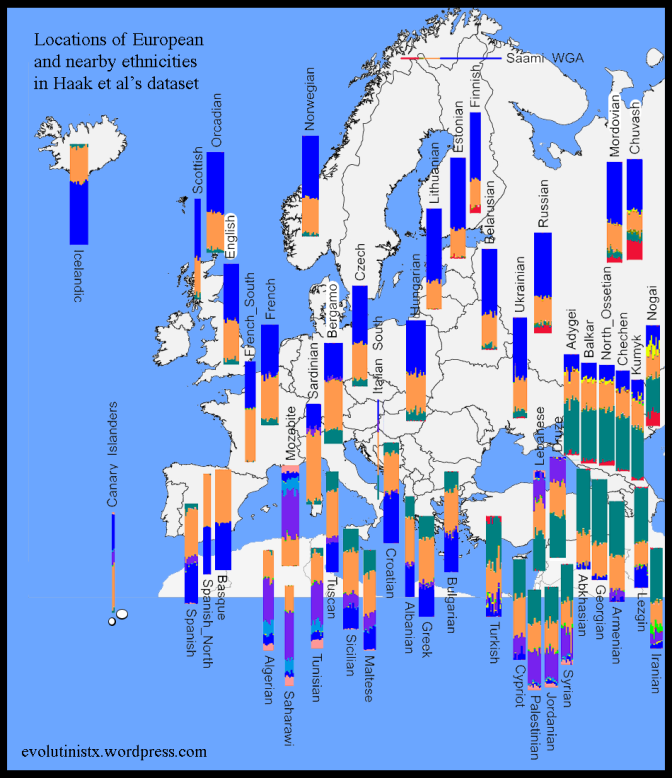 I really like how this one turned out. I think I’ve finally hit my stride with arranging these rectangles. As always, feel free to ask if anything is unclear.

I just realized that I left the north African ethnicities off the previous map. I’ll have to fix it.