Suppose you have a population–we’ll call it PopA. PopA can be just about any group of people–farmers, classical music lovers, Ukrainians, women, etc. In any population, you’re going to get a range of traits (unless you’ve selected your population in some exact way). Farmers, for example, vary in the sizes and productivity of their farms; women vary in height and weight. Variation in many (though not all) traits can be modeled with a bell curve:

Take height: some people are very short, and some are very tall, but most cluster near their group’s average. 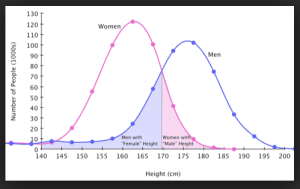 A graph of male and female heights

In America, the biggest groups people tend to be aware of (or act like they are aware of) are gender and race: 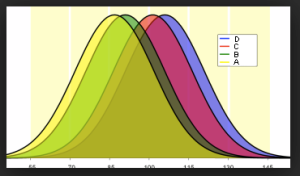 “Normal” people–that is average ones–tend to have, by definition, a lot of traits in common with the other people in their group. These folks fit in comfortably. For our example, a normal member of Group A, while more introverted than the national average, is perfectly at home among most other members of Group A. A normal member of Group C, while more extroverted than the national average, is perfectly happy among other members of Group C.

To be explicit: normies have it pretty good. They are constantly surrounded by people who are just like themselves. Outliers, by contrast, tend to be alone (and are often ostracized, bullied, or otherwise attacked by more normal people.)

The thing about traits is that they tend to cluster. People from Pakistan, for example, tend to be Muslim, speak Urdu + a second language, and have brown skin. People with a specific mutation of the EDAR gene–found primarily in east Asians–have thicker hair, more sweat glands, smaller breasts, and differently shaped teeth than people without it. People who like country music are more likely to be pro-life than people who like techno. Women tend to like handbags, diets, and babies, while men tend to like sports and cars.

If traits didn’t cluster, we wouldn’t have groups.

Normies A, B, and C get along well with normal people from their own groups, but tend not to get along all that well with normal people from other groups. Normie A, for example, is a perfectly normal introvert from group A, and finds most people from groups B and C way too extraverted and regards interacting with them as quite unpleasant. Normie C is a perfectly normal extravert from Group C, and finds most people from groups A and B way too introverted. Normie B thinks there are some perfectly reasonable members of Groups A and C, but that most As and Cs are extremists, and that both sides need to be more like B.

But this is not generally a problem, as normies can just hang out with other people from their own group, who tend to be like themselves.

Obviously my graphs have been rather arbitrarily chosen (actually, chosen for their ability to show up well on the screen rather than their accurate portrayal of the ethnic breakdown of introversion/extraversion.) It is easy to imagine traits that vary in all sorts of interesting ways between groups, depending on the shapes of their relative bell curves. Despite the limitations of my visuals, I hope the overall idea, however, is clear.

Anyway, this was all inspired by conversations/observations I was reading the other day on the kinds of people who enter into interracial marriages. No, I wasn’t reading Stormfront; these were perfectly mainstream-to-leftist people who probably approve of interracial marriage. For example, I have read several complaints from Asian women who say that they get a lot of attention from really creepy guys who have some kind of weird Asian fetish. (And here I just assumed that guys like Asian women because Asian women are less obese.) Another post, written by the (grown) child of an interracial couple, asserted that his dad had married interracially because he was too socially incompetent to attract a woman of his own race.

Harsh, but from the normie perspective, people who get along well with members of other races may in fact be outliers from their own, and are thus considered “socially incompetent.”

At the opposite end of the spectrum, anecdotal observation of white women who marry black men suggests that they, too, are not “average,” but instead have a lot in common, personality-wise, with black men. They tend also to have more limited social opportunities due to poverty. (This should be a caution, by the way, for people trying to model the effects of racial admixture: admixture is unlikely to come from a random sample of the population, but to have been selected in some way.)

I feel like repeating here that even though normal people are harsh on outliers, does not automatically mean that being an outlier is morally reprehensible. Highly intelligent people and criminals are both outliers; very short and very tall people are outliers. Blind people and homosexuals are outliers. Outliers can be good, bad, or totally neutral. They’re just not normal, and normal people think that being normal is morally good, because they’re normal, and people default to thinking that they and people like them are good.

As I noted back in the post about adoption, 61% of whites say they’re okay with intermarriage, but only about 2% of them have mixed or other-race children, including step and adopted kids. Given the number of minorities in the country + random chance, about half of the whites who say they’re okay with intermarriage ought to have a mixed-race family–30% of whites, not 2%. Breaking it down by liberal vs. conservative doesn’t help–2% of conservative whites live in mixed-race families, vs. 2.4% of liberal whites, which is really not much of a difference to crow about.

Being okay with intermarriage is a normative value among whites (and probably other racial groups, too,) but differences in the distribution of personality traits may prevent most normal people from forming a lot of friendships (or romantic relationships) with people from different races. By contrast, outliers may get along better with people of other races. Ironically, this means that people whom normals might characterize as “racist” are likely to actually get along pretty well with people of other (or certain) races.

Hence why Derbyshire, a “white advocate,” is married to an Asian woman.