First, a bit of history:

It appears that there were (at least) 3 main cross-breeding events with Neanderthals. The first event most likely happened when one small band of humans had left Africa and ventured into the Middle East, where Neanderthals were living. The DNA acquired from that partnership can be found in all modern non-Africans, since they are all descended from this same group. (Since there has also been back-migration from the Middle East into Africa sometime in the past 70,000 years, many African groups also have a small amount of this DNA.)

Soon after, the group that became the Melanesians, Papuans, and Aborigines split off from the rest and headed east, where they encountered–and interbred with–the mysterious Denisovans, a third human species that we know mostly from DNA. Various sources claim this happened before the second neanderthal inter-breeding event, but just looking at the amount of admixed neanderthal in Oceanans suggests this is wrong.

During their wanderings, some of these Asians encountered Melanesians, resulting in a little Denisovan DNA in today’s south Asians (especially Tibetans, who appear to have acquired some useful adaptations to Tibet’s high altitude from ancient Denisovans.)

Who married whom? So far, we’ve found no evidence of Neanderthal mitochondrial DNA–passed from mothers to their children–in modern humans, so the pairings most likely involved Neanderthal men and human women. But we have also found extremely little Neanderthal DNA on the Y chromosome–so it is likely that they only had female children, or any male children they had were infertile. 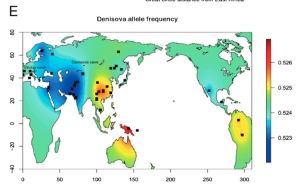 Given the dearth of DNA on the Y chromosome and the number of diseases linked to Neanderthal DNA, including Lupus, Crohn’s, cirrhosis, and Type-2 diabetes, the fact that morphological differences between Sapiens and Neanderthals are large enough that we classify them as different species, and the fact that Neanderthals had larger craniums than Sapiens but Sapiens women attempting to give birth to hybrid children still had regular old Sapiens pelvises, gradual selection against Neanderthal DNA in humans seems likely.

However, the Neanderthals probably contributed some useful DNA that has been sorted out of the general mix and come down the ages to us. For example, the trait that allows Tibetans to live at high altitudes likely came from a Denisovan ancestor:

Researchers discovered in 2010 that Tibetans have several genes that help them use smaller amounts of oxygen efficiently, allowing them to deliver enough of it to their limbs while exercising at high altitude. Most notable is a version of a gene called EPAS1, which regulates the body’s production of hemoglobin. They were surprised, however, by how rapidly the variant of EPAS1spread—initially, they thought it spread in 3000 years through 40% of high-altitude Tibetans, which is the fastest genetic sweep ever observed in humans—and they wondered where it came from.

Modern humans have Neanderthal DNA variants for keratin (a protein found in skin, nails, hair, etc.,) and UV-light adaptations that likely helped us deal with the lower light levels found outside Africa. There’s circumstantial evidence that microcephalin D could have Neanderthal origins (it appeared about 37,000 years ago and is located primarily outside of Africa,) but no one has found microcephalin D in a Neanderthal, so this has not been proven. (And, indeed, another study has found that Neanderthal DNA tends not to be expressed in the brain.)

Yet on the other hand, Neanderthal admixture affected sapiens’ skull shapes:

Here, using MRI in a large cohort of healthy individuals of European-descent, we show that the amount of Neanderthal-originating polymorphism carried in living humans is related to cranial and brain morphology. First, as a validation of our approach, we demonstrate that a greater load of Neanderthal-derived genetic variants (higher “NeanderScore”) is associated with skull shapes resembling those of known Neanderthal cranial remains, particularly in occipital and parietal bones. Next, we demonstrate convergent NeanderScore-related findings in the brain (measured by gray- and white-matter volume, sulcal depth, and gyrification index) that localize to the visual cortex and intraparietal sulcus. This work provides insights into ancestral human neurobiology and suggests that Neanderthal-derived genetic variation is neurologically functional in the contemporary population.

(Not too surprising, given Neanderthals’ enormous craniums.)

Homo sapiens also received Neanderthal genes affecting the immune system, which were probably quite useful when encountering new pathogens outside of Africa, and genes for the “lipid catabolic process,”[19] which probably means they were eating new, fattier diets that Neanderthals were better adapted to digest.

Even Neanderthal-derived traits that today we cast as problems, like Type II Diabetes and depression, might have been beneficial to our ancestors:

“Depression risk in modern human populations is influenced by sunlight exposure, which differs between high and low latitudes, and we found enrichment of circadian clock genes near the Neanderthal alleles that contribute most to this association.”

Why would we find an association between Neanderthal DNA and circadian clock genes? Neanderthals had thousands of years more exposure to Europe’s long nights and cold winters than homo Sapiens’; it is unlikely that they developed these adaptations in order to become less well-adapted to their environment. It is more likely that Neanderthals downregulated their activity levels during the winter–to put it colloquially, they hibernated.

No problem for furry hunter-gatherers who lived in caves–much more problematic for information age workers who are expected to show up at the office at 9 am every day.

Type II diabetes affects digestion by decreasing the production of insulin, necessary for transporting converting carbs (glucose) into cells so it can be transformed into energy. However, your body can make up for a total lack of carbs via ketosis–essentially converting fats into energy.

Our hunter-gatherer ancestors–whether Neanderthal or Sapiens–didn’t eat a lot of plants during the European and Siberian winters because no a lot of plants grow during the winter. If they were lucky enough to eat at all, they ate meat and fat, like the modern Inuit and Eskimo.

And if your diet is meat and fat, then you don’t need insulin–you need ketosis and maybe some superior lipid digestion. (Incidentally, the data on ketogenic diets and type II diabetes looks pretty good.)

In sum, Neanderthal and Denisovan DNA, while not always useful, seems to have helped Homo sapiens adapt to colder winters, high altitudes, new pathogens, new foods, and maybe changed how we think and perceive the world.

Getting sick actually makes you more likely to get sick, not less. Take measles:

“A new epidemiological study suggests that [people who’ve had the measles] remain susceptible to other infections for more than 2 years, much longer than researchers anticipated. The results bolster a hypothesis that the measles virus undermines the immune system’s memory—and indicate that the measles vaccine protects against other deadly diseases as well.

Researchers have long known that measles inhibits the immune system, but they generally thought this effect wore off after a few months at the most. However, studies of children in developing countries, where most cases occur, found that measles vaccination reduces the overall death rate from infections for up to 5 years, suggesting that preventing the disease somehow provides protection against other illnesses.” —Mitch Leslie, Science/AAAS News

Not so marvelous now, are they?

Honestly, if getting sick made you less likely to get sick afterwards, everyone who got Smallpox would have had the immune system of doom and never died of anything; malaria would have rendered sub-Saharan Africa a disease-free zone.

Long term, populations get less prone to getting specific diseases just because the most susceptible people have died and people with mutations or behaviors that make them more resistant have survived.

I have been reading a lot about AIDS.