Writing, which is itself a form of code, enable humans to communicate code. Cities grow as code evolves. –Auerswald

One of the earliest pieces of writing we have uncovered is the Sumerian Hymn to Ninkasi, Goddess of Beer, which contains, yes, a recipe for making beer (translation by Miguel Civil):

You guys requested beer or wine with your books, so here you go.

The hymn contains two layers of code–first, there is the code which allows each symbol or character to stand for a particular sound, which let the author write down the recipe and you, thousands of years later, decode and read the recipe; and second, there is the recipe itself, a code for producing beer.

The recipe’s code likely far predates the hymn itself, as humans had begun brewing beer at least a couple thousand years earlier.

Writing and cities go hand in hand; it is difficult to imagine managing the day-to-day need to import food (and water) for thousands of people without some ability to encode information. As cities grow larger, complexity grows: one man in the woods may relieve himself behind a tree; thousands of people packed into a square mile cannot.

Each solved problem, once routinized, becomes its own layer of code, building up as the city itself expands; a city of thousands or millions of people cannot solve each person’s problems anew each day.

For example, settlement and construction appear to have gotten underway at Jericho (one of the world’s oldest inhabited cities) around 9 or 10,000 BC and at the mysterious Gobekli Tepe site began around 7-9,000 BC, before agriculture emerged in the region.

Writing developed a fair bit later, developing from clay shapes to shapes impressed in clay between 8,000 and 4,000 BC.

Others of the world’s earliest civilizations had either no or very little writing. The Norte Chico civilization of Peru, for example; by the time the Spaniards arrived, the Inca had an accounting system based on the quipu, a kind of string abacus, but appear to have not yet developed a true writing system, despite their palaces, cities, roads, emperor, and tax collectors. (Here is my previous post on Norte Chico.)

The extensive Indus Valley civilization had some form of symbolic encoding, but few of their inscriptions are longer than 4 or 5 characters–the longest inscription found so far is 26 symbols, spread over three different sides of an object. Not exactly an epic–but the Indus Valley Civilization was nevertheless quite large and impressive, supporting perhaps 5 million people. (Previous post on the Indus Valley.)

Auerswald documents some of the ways cities appear to drive innovation–and to “live”:

The Santa Fe team found that cities are like biological organisms when it comes to “metabolic” urban processes that are analogous to nutrient supply and waste removal–transportation, for example, ha a branching structure much like veins or bronchi–but that cities differ fundamentally from biological organisms when it comes to indicators reflecting the creation and transmission of code. measuring the size of cities based on population and on the urban “metabolism” using metrics such as wages, GDP, electric power and gasoline consumption, and total  road surface, the team found a systematic relationship between city size and indicators of the supply of “nutrients” and waste removal… However, while metabolic indicators do not keep pace with the size of cities as they grow, indicators relating to the creation and transmission of code increase at a greater rate than city size. … In short, the creation of ideas accelerates with city growth, whereas the cost of new infrastructure is minimized.

This intriguing macro-level departure from the inverse relationships that hold for organisms ends up risking more questions about the evolution of cities than it answers: What mechanism enables larger cities to produce disproportionately more innovation and wealth than smaller cities?

Data Economy has a fascinating article in a similar vein: Street Smarts: The Rise of the Learning City:

The city as a brain

However the one I would like to propose, with population movement in mind, is The Learning City.

The term is based on a combination of two theories The Ego City and The Flynn Effect.

Changizi sees strikingly real similarities between the brain and a city.

The central idea being that they organise and evolve similarly due to the need for efficiency.

As brains grow more complex from one species to the next, they change in structure and organisation in order to achieve the right level of reciprocity.

This is analogous to the widening of streets in cities.

For example, as the surface area of a brain or city grows, the number of connectors (neurons or highways) increased at a similar rate for each.

Cities develop and grow bigger and may get problems with roads and infrastructure, which is similar to what happens to our brains when we get older”, notes Håkan Fischer, Professor of Biological Psychology at the Department of Psychology at Stockholm University.

This is curious when taken in the context of The Flynn Effect.

An average increase of 3 points per decade.

His thesis suggests that the more information we as humans have to absorb and compute leads to an increase in IQ.

In this instance the increased information is data collected within the city.

As cities gain more data they adapt and in turn get smarter.

Human brains faced with a busier world filled with more information brings about an increase in IQ from generation to generation.

As people migrant to cities creating a more complex environment for the city it to must gather this data, learn and raise its Smart City IQ.

This is The Learning City.

On the other hand, the data Auerswald cites–from the “Santa Fe Team”–only looks at cities from the US, China, the EU, and Germany. How would this data look if it incorporated other megacities, like Manila, Philippines (the world’s densest city); Sao Paolo, Brazil; Bombay, India; Caracas, Venezuela; Karachi, Pakistan; or Jakarta, Indonesia? Of the world’s ten biggest cities, only two–Seoul, #1, and Tokyo, #10–are in the first world. (#9 Shanghai, is well on its way.)

#2 Sao Paolo might be more energy efficient than villages in the Brazilian hinterland (or it may not, as such towns may not even have electricity,) but does it produce more innovation than #11 New York City? (No American city made the top 10 by population.)

If cities are drivers of innovation, why are so many of the biggest in the third world? Perhaps third world countries offer their citizens so little that they experience a form of extreme brain drain, with everyone who can fleeing to the most productive regions. Or perhaps these cities are simply on their way–in a century, maybe Sao Paolo will be the world’s next Shanghai.

The city, by definition, is civilization–but does the city itself spur innovation? And are cities, themselves, living things?

Geoffrey West has some interesting things to say on this theme:

“How come it is very hard to kill a city? You can drop an atom bomb on a city, and 30 years later, it’s surviving.”

Here’s a transcript of the talk. 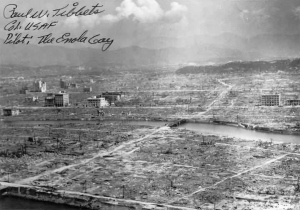