I am trying to think through some ideas that have been slowly percolating. Any thoughts/comments welcome and encouraged.

I propose first that we can divide politics–on either side of the Red/Blue tribe divide–into “high” and “low”. High politics are those of the upper classes, the rich, the folks who already have power. Low politics are the concerns of rest of us.

“High” is not necessarily better or more important than “low.” They are just different.

To explain better, I want to draw an analogy with Free Northerner’s distinction between “Nerds” and “Geeks”:

One man did a statistical analysis of the usage of the words and how they correlate with other words. He defined them as such:

geek – An enthusiast of a particular topic or field. Geeks are “collection” oriented, gathering facts and mementos related to their subject of interest. They are obsessed with the newest, coolest, trendiest things that their subject has to offer.
nerd – A studious intellectual, although again of a particular topic or field. Nerds are “achievement” oriented, and focus their efforts on acquiring knowledge and skill over trivia and memorabilia.

… The statistical analysis comes to this conclusion:

In broad strokes, it seems to me that geeky words are more about stuff (e.g., “#stuff”), while nerdy words are more about ideas (e.g., “hypothesis”). Geeks are fans, and fans collect stuff; nerds are practitioners, and practitioners play with ideas. Of course, geeks can collect ideas and nerds play with stuff, too. Plus, they aren’t two distinct personalities as much as different aspects of personality. Generally, the data seem to affirm my thinking.

FN also includes this graphic, from Burrsettles’s article, On “Geek” vs. “Nerd”:

Or to put it more plainly:

There is a great deal of overlap between “geek” and “nerd” culture, otherwise no one would bother trying to distinguish between them–no one makes graphs on the difference between “motorcycle culture” and “chefs,” not because chefs never ride motorcycles, but because they are very distinct groupings. Geeks and nerds, by contrast, lie on a sort of personality continuum, where the main difference is probably IQ. (Though obviously some of the semantic distinctions are random, eg, “goths” under “nerd” and “#Linux” under “geek.”)

To return to our original discussion, “nerds” are the “high” end and “geeks” the “low” end of a single culture. Nerds are (relatively) high-status, with paying jobs that advance the well-being of humanity. Geeks are low-status, with lower IQs (on average) and jobs that are not generally recognized as advancing humanity.

This doesn’t make it morally wrong or bad to enjoy comic books or Firefly; it’s just kind of low status to be obsessed with them.

Young people in search of their own place in the world often explore a variety of different cultures, marked by particular clothes, music, TV shows, etc. This includes geek culture, which many people enjoy in highschool/college, but find less time for as they get jobs, marry, have kids, and generally age.

Studying quantum physics is hard. I can’t do it. <1% of the population can do it. But almost anyone can play video games or watch Firefly. Lots of people can read comic books and put together a nice cosplay. These activities are fun and let people feel like they’re part of the same culture as Neil deGrasse Tyson and Caltech professors.

Let’s go back to politics.

I propose a similar division between “high” and “low” politics. For example, globalism is high Blue-tribe politics; trans rights are low blue-tribe politics. Most of the people who are actively involved in globalization are high-status people like diplomats, businessmen, or lawmakers. Most of the people actively fighting for trans rights are trans themselves or their lgbq-“allies,” all of whom are much lower status than businessmen.

On the right, nationalism is high politics (at least currently); anti-trans rights is low politics.

Likewise, the Republican leadership says it opposes abortion, but has actually devoted far more resources to killing Iraqis than to stopping abortion.

How much of low politics do high class people actually believe in, and how much is just vaguely associated with them? How much do they use as a bludgeon against others without actually believing?

Right now, I’d say it’s nationalism vs. internationalism. But I’m sure it’s more than just that.

I think this is relevant: 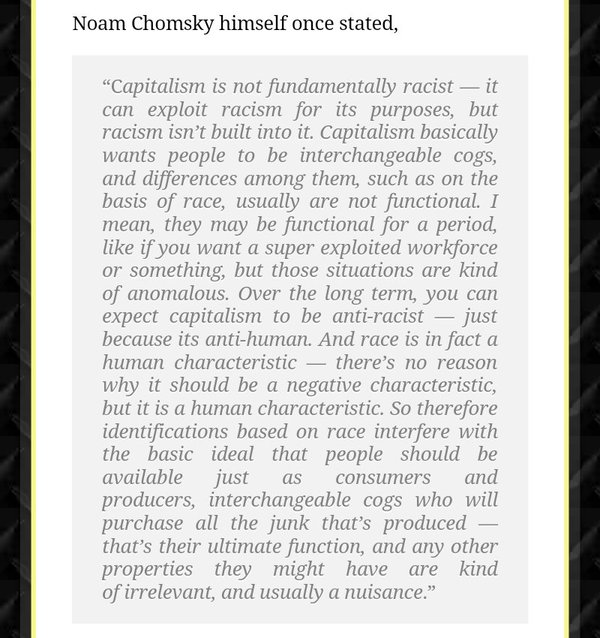 “In Foucault’s 1971 televised debate with Noam Chomsky, Foucault argued against the possibility of any fixed human nature, as posited by Chomsky’s concept of innate human faculties. Chomsky argued that concepts of justice were rooted in human reason, whereas Foucault rejected the universal basis for a concept of justice. Following the debate, Chomsky was stricken with Foucault’s total rejection of the possibility of a universal morality, stating “He struck my as completely amoral, I’d never met anyone who was so totally amoral” … “I mean, I liked him personally, it’s just that I couldn’t make sense of him. It’s as if he was from a different species, or something”” (from the Wikipedia page on Foucault)

Morality is an evolved sense; different societies have evolved different moral structures. In this sense Chomsky and Foucault are each half-right.

The point, though, is less about what morality is, as about how humans think of morality in other humans; Foucalt is particularly distant from anything most people (especially most Americans) would recognize as moral.