Welcome back to our discussion of Legal Systems Very Different From Ours. Sorry for the slight delay; we’ve been recovering from Halloween. Today we’ll be discussing Athenian law.

Athens is famous for being the inspirational democracy, though the extent to which it was actually a democracy is a tad overstated by modern standards–we’re not sure exactly how many people lived in ancient Athens, but the majority of them, probably a supermajority, could not vote. Only male citizens could vote; the population also contained, (aside from women) a large number of “resident aliens” who were free, but not citizens, and plenty of slaves.

The obvious issue with this system is that the non-citizen population is likely to grow faster than the citizen population, but citizenship carries with it too many benefits to be given away lightly.

The less obvious issue is that people often fell in love with people from other social castes and wanted them for primary spouses, not secondary spouses. This theme shows up a lot in Greek plays, in which star-crossed lovers from across social castes face doom until, at the climax, it’s revealed that there was a mix-up at one of their births and the beloved is actually an Athenian citizen and the marriage can go forward. (Or at least this is a major plot point in A Funny Thing Happened on the Way to the Forum, an American play of the 1960s.)

The benefits of being a male Athenian citizen included the right to marry another Athenian citizen, vote in the assembly (Athens was a direct democracy, not a representative one,) serve on a jury, (juries were huge, often 200 to 500 people,) serve as a magistrate, be a paid arbiter, and own property.

Resident aliens (called “metics”) were not slaves, but generally couldn’t participate in the government or own land They could prosecute some legal cases and had to have a citizen “sponsor.” Exceptions existed.

Debt slavery was abolished as part of the reforms of Solon about two hundred years before the start of the period being discussed, so most slaves were either prisoners taken in war or the descendants of such. … A slave’s owner could sue to collect damages for an injury to his slave and could be sued for damages done by his slave. He was not free to kill his slave but was free to beat him.

One wonders who would bother to prosecute the case of a slave who died under mysterious circumstances whose owner claims he didn’t kill him.

Slaves worked the typical gamut of jobs, from servant to farm laborers to silver miners.

It occurs to me that we tend to read about ancient Athens through people who generally held it in high regard; we don’t have many of the original legal documents from the Athenian legal system (we have, however, various speeches that people gave arguing their court cases, which often contained descriptions of relevant laws,) or much in the way of records made by Athenian non-citizens; I can’t recall even having read anything written by a Spartan, who might offer a countering opinion on the quality of Athenian government. Imagine if we were in a similar position with respect to the US–the US fell, most of our texts were destroyed, a Dark Age ensued, and a thousand years later, people began digging up American artifacts and decided the US must have been a pretty happening place; people began learning Ancient English and reading American novels and philosophers in school. Now another thousand years pass, and you’re trying to piece together the American legal system from old Perry Mason episodes and a thousand years of scholarship… and we would have about the situation we now have with ancient Athens.

Jury trials must have taken up a lot of Athenian time:

Each year, 6,000 jurors were selected by lot from those who volunteered; the only qualification was being a male citizen and at least 30 years old. … If we accept an estimate of 30,000 for the total number of adult male citizens, at any one time about a fifth of them were on the jury panel.

These cases had between 200-500 jurors each; Athenians must have loved trials (which is probably why they went to the effort of getting professional speech writers to compose their legal orations, some of which were popular enough to be preserved down to the present day).

Witnesses gave their testimony in writing in advance; during the trial, their only contribution was to confirm that it was indeed theirs.

This implies that a lot of people were literate–or else there were scribes for the purpose. Either way, Athenian society clearly was pretty literate, which always prompts the question: why? We can’t credit the state of things at this point for having created themselves, so what did cause the flourishing of Athenian learning and culture?

The testimony of slaves, however, sounds pretty awful:

The evidence of slaves was admissible only if given under torture and only if the owner permitted it.

The Athenians had public and private cases; any male citizen could prosecute a private case, and for many cases the prosecutor received a large fraction of the resulting fine, providing an incentive for ordinary citizens to take on cases–but to protect against malicious prosecution, if a fifth of jurors failed to vote for him, he could be fined and barred from bringing future suits.

We worry about police planting drugs on a suspect in the process of search; the Athenians worried about a private party planting his own property on someone in order to accuse him of stealing it. They had a simple solution. The accuser was allowed to sear the house where he suspected his stolen property was hidden. But he had to do it naked.

The Athenians believed in a kind of contagious ritual pollution called miasma. The threat of contagion meant that murderers had to be exiled or kept out of the courts and temples:

In one case we know of, a defendant charged with murder claimed that the only reason for the charge was to keep him from showing up in another court to prosecute a different case.

Belief in miasma also resulted in the objects used in murders being ritually exiled.

So I tried to look up “The State of California vs 88 Ford Truck” and failed, but I did find the excitingly titled United States v. Article Consisting of 50,000 Cardboard Boxes More or Less, Each Containing One Pair of Clacker Balls:

United States v. Article Consisting of 50,000 Cardboard Boxes More or Less, Each Containing One Pair of Clacker Balls, 413 F. Supp. 1281 (D. Wisc. 1976), is a 1976 United States District Court for the Eastern District of Wisconsin decision regarding a requested order from the United States government to seize and destroy a shipment of approximately 50,000 sets of clacker balls under the Federal Hazardous Substances Act because children could hit themselves with the balls.[1][2]

The form of the styling of this case — the defendant being an object, rather than a legal person — is because this is a jurisdiction in rem (power over objects) case, rather than the more familiar in personam (over persons) case.

So they destroyed the clacker balls because children could hit themselves with them.

There are then some rules of family life/inheritance which are pretty standard fare. Adoption was legal, but like becoming a citizen, seems a bit onerous. Only males could inherit property, but were required to support the surviving womenfolk of the family.

If a man died with a daughter but no male descendants she would be required to marry the nearest male relative, outside of the narrow limits of the incest rules, who would have her.

Okay, that seems kind of bad for the children, but not too awful…

If already married she was required to divorce her husband.

What? This makes marrying a gal who has no brothers an awfully bad deal!

Finally, the authors examine the production of “public goods”, which were simply assigned every so often to local rich people:

If you were one of the richest Athenians, every two years you were obliged to produce a public good. The relevant magistrate would tell you which one.

It seems like a system that, despite its obvious flaws, worked pretty well so long as the population of Athens stayed small enough.

What did you think? Thankfully ancient Greece is a very well-studied place, so hopefully some of you are experts on the era and have some great insights to share.

Take care and enjoy the weekend.

…we need to stop pretending that the worst thing the Athenians ever did was to execute Socrates and openly engage the true dark side of Classical Athens’ anti-immigration policies and the obsession with ethnic purity that lies at the heart of its literature, history, and philosophy….

Known as the Periclean Citizenship Law, the law passed around 451 BCE restricted access to political power and other legal rights to only those born of both a citizen mother and father. 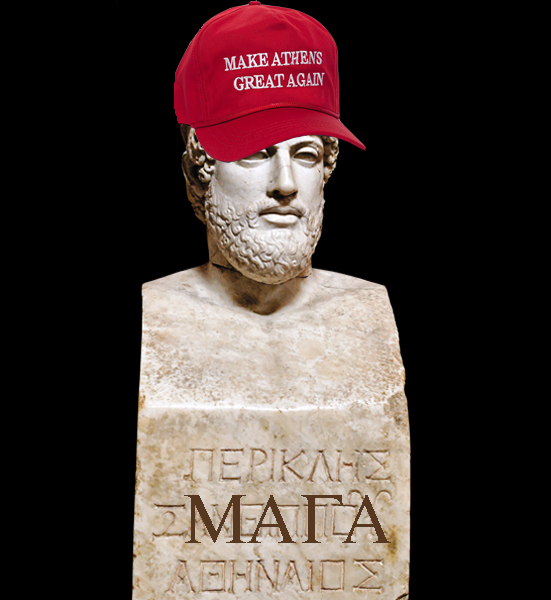 You asked. I deliver.

(And yes, I did know about the Periclean Citizenship Law before she brought it up.)