Hey guys, I’m working on a post about Christmas but I’m not quite done double checking my sources, so tell me about your New Years’ resolutions.

Here are some interesting links in the meanwhile:

The Catch-22 of Energy Storage :

Pick up a research paper on battery technology, fuel cells, energy storage technologies or any of the advanced materials science used in these fields, and you will likely find somewhere in the introductory paragraphs a throwaway line about its application to the storage of renewable energy.  Energy storage makes sense for enabling a transition away from fossil fuels to more intermittent sources like wind and solar, and the storage problem presents a meaningful challenge for chemists and materials scientists… Or does it?

Red Cross built Exactly 6 Homes in Haiti with half a Billion Dollars:

In late 2011, the Red Cross launched a multimillion-dollar project to transform the desperately poor area, which was hit hard by the earthquake that struck Haiti the year before. The main focus of the project — called LAMIKA, an acronym in Creole for “A Better Life in My Neighborhood” — was building hundreds of permanent homes. …

The Red Cross says it has provided homes to more than 130,000 people. But the actual number of permanent homes the group has built in all of Haiti: six. …

In statements, the Red Cross cited the challenges all groups have faced in post-quake Haiti, including the country’s dysfunctional land title system.

“Like many humanitarian organizations responding in Haiti, the American Red Cross met complications in relation to government coordination delays, disputes over land ownership, delays at Haitian customs, challenges finding qualified staff who were in short supply and high demand, and the cholera outbreak, among other challenges,” the charity said.

… While the group won’t provide a breakdown of its projects, the Red Cross said it has done more than 100. The projects include repairing 4,000 homes, giving several thousand families temporary shelters, donating $44 million for food after the earthquake, and helping fund the construction of a hospital.

Is the age at which British women are having babies changing? 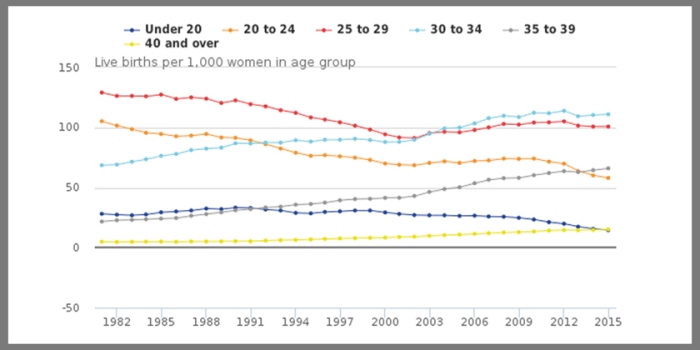 Was there a vast back-migration of Eurasians into Africa? As of 2016, Razib said no. (Of course, things could have changed since then.)

Analysing population genomic data from killer whale ecotypes, which we estimate have globally radiated within less than 250,000 years, we show that genetic structuring including the segregation of potentially functional alleles is associated with socially inherited ecological niche. Reconstruction of ancestral demographic history revealed bottlenecks during founder events, likely promoting ecological divergence and genetic drift resulting in a wide range of genome-wide differentiation between pairs of allopatric and sympatric ecotypes. Functional enrichment analyses provided evidence for regional genomic divergence associated with habitat, dietary preferences and post-zygotic reproductive isolation. Our findings are consistent with expansion of small founder groups into novel niches by an initial plastic behavioural response, perpetuated by social learning imposing an altered natural selection regime. The study constitutes an important step towards an understanding of the complex interaction between demographic history, culture, ecological adaptation and evolution at the genomic level.

African Pygmies practicing a mobile hunter-gatherer lifestyle are phenotypically and genetically diverged from other anatomically modern humans, and they likely experienced strong selective pressures due to their unique lifestyle in the Central African rainforest. To identify genomic targets of adaptation, we sequenced the genomes of four Biaka Pygmies from the Central African Republic and jointly analyzed these data with the genome sequences of three Baka Pygmies from Cameroon and nine Yoruba famers. … Our two best-fit models both suggest ancient divergence between the ancestors of the farmers and Pygmies, 90,000 or 150,000 years ago. … We found that genes and gene sets involved in muscle development, bone synthesis, immunity, reproduction, cell signaling and development, and energy metabolism are likely to be targets of positive natural selection in Western African Pygmies or their recent ancestors.

NY Times, blaming people for their own deaths:

If only people knew how much the past sucked, they’d die less.

From 2015, but still a good example of the absurd and arbitrary nature of the state we live in: Texas police hit Organic farm with Massive SWAT Raid:

A small organic farm in Arlington, Texas, was the target of a massive police action last week that included aerial surveillance, a SWAT raid and a 10-hour search.

Members of the local police raiding party had a search warrant for marijuana plants, which they failed to find at the Garden of Eden farm. But farm owners and residents who live on the property told a Dallas-Ft. Worth NBC station that the real reason for the law enforcement exercise appears to have been code enforcement. The police seized “17 blackberry bushes, 15 okra plants, 14 tomatillo plants … native grasses and sunflowers,” after holding residents inside at gunpoint for at least a half-hour, property owner Shellie Smith said in a statement. The raid lasted about 10 hours, she said.

History: The Extinction of the Australian Pygmies

That’s all for now. Whatever you celebrate, have fun with your loved ones and enjoy the holidays.