Unless I have missed a paper somewhere, this is a remarkable chapter, for The 10,000 Year Explosion was published in 2009, and the first Neanderthal genome showing more overlap with Europeans (and Asians) than Sub-Saharans was published in 2010. Greg and Henry did know of genetic evidence that humans have about 5% admixture from some archaic sister-species, but no one yet had evidence of which species, nor was there popular agreement on the subject. Many scientists still rejected the notion of Sapiens-Neanderthal interbreeding when Cochran and Harpending laid out their bold claim that not only had it happened, but it was a critical moment in human history, jump-starting the cultural cultural effervescence known as behavioral modernity.

Homo sapiens have been around for 300,000 years–give or take a hundred thousand–but for most of that time, we left behind rather few interesting artifacts. As the authors point out, we failed to develop agriculture during the Eemian interglacial (though we managed to develop agriculture at least 7 times, independently, during the current interglacial). Homo sapiens attempted to leave Africa several times before 70,000 years ago, but failed each time, either because they weren’t clever enough to survive in their new environment or couldn’t compete with existing hominins (ie, Neanderthals) in the area. 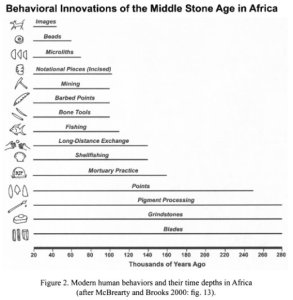 Sapiens’ technology didn’t do much interesting for the first couple hundred thousand years, either. Yet 70,000 years ago, sapiens did manage to leave Africa, displace the Neanderthals, spread into radically new climates, developed long distance trade and art, and eventually agriculture and everything we now enjoy here in the modern world.

According to Wikipedia, behavioral modernity includes:

This leaves two important questions re: Cochran and Harpending’s theory. First, when exactly did behavioral modernity emerge, and second, was it a gradual transition or a sudden explosion?

Prehistoric art is tricky to date–and obviously did not always get preserved–but Blombos Cave, South Africa, currently contains our earliest piece, from about 70,000-100,000 years ago. The Blombos art is not figurative–it’s patterns of crosshatched lines–but there’s a fair amount of it. Blombos appears to have been an ochre-processing spot (the art is made with or on pieces of ochre) littered with thousands of leftover scraps. According to Wikipedia:

In 2008 an ochre processing workshop consisting of two toolkits was uncovered in the 100,000-year-old levels at Blombos Cave, South Africa.[3] Analysis shows that a liquefied pigment-rich mixture was produced and stored in the shells of two Haliotis midae (abalone), and that ochre, bone, charcoal, grindstones and hammer-stones also formed a composite part of the toolkits. As both toolkits were left in situ, and as there are few other archaeological remains in the same layer, it seems the site was used primarily as a workshop and was abandoned shortly after the pigment-rich compounds were made. Dune sand then blew into the cave from the outside, encapsulated the toolkits and by happenstance ensured their preservation before the next occupants arrived, possibly several decades or centuries later.

The application or use of the compound is not self-evident. No resins or wax were detected that might indicate it was an adhesive for hafting.

70 beads made from shells with holes drilled in them have also been found at Blombos.

Blombos is interesting, but the “art” is not actually very good–and we can’t say for sure that it was meant as art at all. Maybe the locals were just scraping the rocks to get the ochre off, for whatever purposes.

Indisputable art emerges a little later, around 40,000 years ago–simultaneously, it appears, in Europe, Asia, Australia, and Indonesia. The archaeology of Africa is less well-documented (in part because things just disintegrate quickly in some areas), but the earliest known sub-Saharan figurative art is about 26,000 years old. This art is both more advanced (it actually looks like art) and more abundant than its predecessors–the Sungir burial, dated to around 30,000-34,000 BC, for example, contains over 13,000 beads–a stark contrast to Blombos’s 70.

If a specific event triggered the simultaneous development of figurative art–and other aspects of behavioral modernity–in four different parts of the world, that event would logically have occurred before those groups split up. The timing of our interbreeding with Neanderthals–“In Eurasia, interbreeding between Neanderthals and Denisovans  with modern humans took place several times between about 100,000 and 40,000 years ago, both before and after the recent out-of-Africa migration 70,000 years ago”–is therefore temporaly perfect.

Subsequent back-migration could have then carried the relevant Neanderthal genomes into Africa–for regardless of where or how behavioral modernity started, all humans now have it.

So what do you think? Did we talk the Neanderthals to death? Did we get the gene for talking from the Neanderthals? Did we out-think them? Or did we just carry some disease or parasite that wiped them out? Or did they wipe themselves out via maternal death in labor, due to their enormous skulls?

(As for FOXP2, it appears that the version found in humans and Neanderthals is slightly different, so I find it a little doubtful that we got it from them.)

A couple of interesting quotes:

In several places, most clearly in central and southwestern France and part of northern Spain, we find a tool tradition that lasted from about 35,000 to 28,000 years ago (the Chatelperronian) that appears to combine some of the techniques of the Neanderthals … with those of modern humans. … Most important, there are several skeletons clearly associated with the Chatelperronian industry, and all are Neanderthal. This strongly suggests that there were interactions between the populations, enough that the Neanderthals learned some useful techniques from modern humans.

P. D. Evans and his colleagues at the University of Chicago looked at microcephalin (MCPH1), a very unusual gene that regulates brain size. They found that most people today carry a version that is quite uniform, suggesting that it originated recently. At the same time, it is very different from other, more varied versions found  at the same locus in humans today, all of which have many single-nucleotide differences among them. More than that, when there are several different versions of a gene at some locus, we normally find some intermediate versions created by recombination, that is, by chromosomes occasionally breaking and recombining. In the case of the unusual gene (called D for “derived”) at the microcephalin locus, such recombinants are very rare: It is as if the common, highly uniform version of microcephalin simply hasn’t been in the human race all that long in spite of the high frequency of the new version in many human populations. The researchers estimated that it appeared about 37,000 years ago (plus or minus a few tens of thousands of years.) And if it did show up then, Neanderthals are a reasonable, indeed likely, source.

So far as I know (and I looked it up a few weeks ago) no one has yet found microcephalin D in Neanderthals–and the date of 37,000 years ago sounds a bit too recent. However, we haven’t actually genotyped that many Neanderthals (it’s hard to find good 40,000 year old DNA), so we might just not have found it yet–and the date might simply be wrong.

It’s a remarkable genetic finding, even if it didn’t involve Neanderthals–and it might be simpler to dispense with other standards and define Homo sapiens as starting at this point.

On a related note, here’s a bit from Wikipedia about the ASPM gene:

A new allele (version) of ASPM appeared sometime between 14,100 and 500 years ago with a mean estimate of 5,800 years ago. The new allele has a frequency of about 50% in populations of the Middle East and Europe, it is less frequent in East Asia, and has low frequencies among Sub-Saharan African populations.[12] It is also found with an unusually high percentage among the people of Papua New Guinea, with a 59.4% occurrence.[13]

The mean estimated age of the ASPM allele of 5,800 years ago, roughly correlates with the development of written language, spread of agriculture and development of cities.[14] Currently, two alleles of this gene exist: the older (pre-5,800 years ago) and the newer (post-5,800 years ago). About 10% of humans have two copies of the new ASPM allele, while about 50% have two copies of the old allele. The other 40% of humans have one copy of each. Of those with an instance of the new allele, 50% of them are an identical copy.[15] The allele affects genotype over a large (62 kbp) region, a so called selective sweep which signals a rapid spread of a mutation (such as the new ASPM) through the population; this indicates that the mutation is somehow advantageous to the individual.[13][16]

Testing the IQ of those with and without new ASPM allele has shown no difference in average IQ, providing no evidence to support the notion that the gene increases intelligence.[16][17][18] However statistical analysis has shown that the older forms of the gene are found more heavily in populations that speak tonal languages like Chinese or many Sub-Saharan African languages.[19]

We still have so much to discover.