Skip to content
HomeAnthropology Friday: Numbers and the Making of Us, part 2 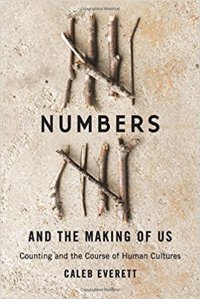 Welcome to part 2 of my review of Caleb Everett’s Numbers and the Making of Us: Counting and the Course of Human Cultures.

I was really excited about this book when I picked it up at the library. It has the word “numbers” on the cover and a subtitle that implies a story about human cultural and cognitive evolution.

Regrettably, what could have been a great books has turned out to be kind of annoying. There’s some fascinating information in here–for example, there’s a really interesting part on pages 249-252–but you have to get through pages 1-248 to get there. (Unfortunately, sometimes authors put their most interesting bits at the end so that people looking to make trouble have gotten bored and wandered off by then.)

I shall try to discuss/quote some of the book’s more interesting bits, and leave aside my differences with the author (who keeps reiterating his position that mathematical ability is entirely dependent on the culture you’re raised in.) Everett nonetheless has a fascinating perspective, having actually spent much of his childhood in a remote Amazonian village belonging to the Piraha, who have no real words for numbers. (His parents were missionaries.)

“…we can reach a few broad conclusions about numbers in speech. First, they are common to nearly all of the world’s languages. … this discussion has shown that number words, across unrelated language, tend to exhibit striking parallels, since most languages employ a biologically based body-part model evident in their number bases.”

That is, many languages have words that translate essentially to “One, Two, Three, Four, Hand, … Two hands, (10)… Two Feet, (20),” etc., and reflect this in their higher counting systems, which can end up containing a mix of base five, 10, and 20. (The Romans, for example, used both base five and ten in their written system.)

“Third, the linguistic evidence suggests not only that this body-part model has motivated the innovation of numebers throughout the world, but also that this body-part basis of number words stretches back historically as far as the linguistic data can take us. It is evident in reconstruction of ancestral languages, including Proto-Sino-Tibetan, Proto-Niger-Congo, Proto-Autronesian, and Proto-Indo-European, the languages whose descendant tongues are best represented in the world today.”

These ranges are not a coincidence: languages change as they age, and once they have changed too much, they become impossible to classify into language families. Older languages, like Basque or Ainu, are often simply described as isolates, because we can’t link them to their relatives. Since humanity itself is 200,000-300,000 years old, comparative linguistics only opens a very short window into the past. Various groups–like the Amazonian tribes Everett studies–split off from other groups of humans thousands 0r hundreds of thousands of years before anyone started speaking Proto-Indo-European. Even agriculture, which began about 10,000-15,000 years ago, is older than these proto-languages (and agriculture seems to have prompted the real development of math.)

The guy with the better numbers doesn’t always conquer the guy with the worse numbers–the Mongol conquest of China is an obvious counter. But in these cases, the superior number system sticks around, because no one wants to replace good numbers with bad ones.

Which means that even though our most successful language families all have number words that appear to be about 4-6,000 years old, we shouldn’t assume this was the norm for most people throughout most of history. Current human numeracy may be a very recent phenomenon.

“The invention of number is attainable by the human mind but is attained through our fingers. Linguistic data, both historical and current, suggest that numbers in disparate cultures have arisen independently, on an indeterminate range of occasions, through the realization that hands can be used to name quantities like 5 and 10. … Words, our ultimate implements for abstract symbolization, can thankfully be enlisted to denote quantities. But they are usually enlisted only after people establish a more concrete embodied correspondence between their finger sand quantities.”

Some more on numbers in different languages:

“Rare number bases have been observed, for instance, in the quaternary (base-4) systems of Lainana languages of California, or in the senary (base-6) systems that are found in southern New Guinea. …

Several languages in Melanesia and Polynesia have or once had number system that vary in accordance with the type of object being counted. In the case of Old High Fijian, for instance, the word for 100 was Bola when people were counting canoes, but Kora when they were counting coconuts. …

some languages in northwest Amazonia base their numbers on kinship relationships. This is true of Daw and Hup two related language in the region. Speakers of the former languages use fingers complemented with words when counting from 4 to 10. The fingers signify the quantity of items being counted, but words are used to denote whether the quantity is odd or even. If the quantity is even, speakers say it “has a brother,” if it is odd they state it “has no brother.”

What about languages with no or very few words for numbers?

In one recent survey of limited number system, it was found that more than a dozen languages lack bases altogether, and several do not have words for exact quantities beyond 2 and, in some cases, beyond 1. Of course, such cases represent a miniscule fraction of the world’s languages, the bulk of which have number bases reflecting the body-part model. Furthermore, most of the extreme cases in question are restricted geographically to Amazonia. …

All of the extremely restricted languages, I believe, are used by people who are hunter-gatherers or horticulturalists, eg, the Munduruku. Hunter gatherers typically don’t have a lot of goods to keep track of or trade, fields to measure or taxes to pay, and so don’t need to use a lot of numbers. (Note, however, that the Inuit/Eskimo have a perfectly normal base-20 counting system. Their particularly harsh environment appears to have inspired both technological and cultural adaptations.) But why are Amazonian languages even less numeric than those of other hunter-gatherers from similar environments, like central African?

Famously, most of the languages of Australia have somewhat limited number system, and some linguists previously claimed that most Australian language slack precise terms for quantities beyond 2…. [however] many languages on that continent actually have native means of describing various quantities in precise ways, and their number words for small quantities can sometimes be combined to represent larger quantities via the additive and even multiplicative usage of bases. …

Everett then digresses into what initially seems like a tangent about grammatical number, but luckily I enjoy comparative linguistics.

In an incredibly comprehensive survey of 1,066 languages, linguist Matthew Dryer recently found that 98 of them are like Karitiana and lack a grammatical means of marking nouns of being plural. So it is not particularly rare to find languages in which numbers do not show plurality. … about 90% of them, have a grammatical means through which speakers can convey whether they are talking about one or more than one thing.

Mandarin is a major language that has limited expression of plurals. According to Wikipedia:

The grammar of Standard Chinese shares many features with other varieties of Chinese. The language almost entirely lacks inflection, so that words typically have only one grammatical form. Categories such as number (singular or plural) and verb tense are frequently not expressed by any grammatical means, although there are several particles that serve to express verbal aspect, and to some extent mood.

Some languages, such as modern Arabic and Proto-Indo-European also have a “dual” category distinct from singular or plural; an extremely small set of languages have a trial category.

Many languages also change their verbs depending on how many nouns are involved; in English we say “He runs; they run;” languages like Latin or Spanish have far more extensive systems.

… some controversial claims of quadral markers, used in restricted contexts, have been made for the Austronesian languages Tangga, Marshallese, and Sursurunga. .. As Corbett notes in his comprehensive survey, the forms are probably best considered quadral markers. In fact, his impressive survey did not uncover any cases of quadral marking in the world’s languages.

Everett tends to bury his point; his intention in this chapter is to marshal support for the idea that humans have an “innate number sense” that allows them to pretty much instantly realize if they are looking at 1, 2, or 3 objects, but does not allow for instant recognition of larger numbers, like 4. He posits a second, much vaguer number sense that lets us distinguish between “big” and “small” amounts of things, eg, 10 looks smaller than 100, even if you can’t count.

How then, Everett asks, do we wed our specific number sense (1, 2, and 3) with our general number sense (“some” vs “a lot”) to produce ideas like 6, 7, and a googol? He proposes that we have no innate idea of 6, nor ability to count to 10. Rather, we can count because we were taught to (just as some highly trained parrots and chimps can.) It is only the presence of number words in our languages that allows us to count past 3–after all, anumeric people cannot.

About 5 seconds of Googling got me “Neural Basis of Mathematical Cognition,” which states that:

The IPS turns out to be part of the extensive network of brain areas that support human arithmetic (Figure 1). Like all networks it is distributed, and it is clear that numerical cognition engages perceptual, motor, spatial and mnemonic functions, but the hub areas are the parietal lobes …

(By contrast, I’ve spent over half an hour searching and failing to figure out how high octopuses can count.)

Moreover, I question the idea that the specific and general number senses are actually separate. Rather, I suspect there is only one sense, but it is essentially logarithmic. For example, hearing is logarithmic (or perhaps exponential,) which is why decibels are also logarithmic. Vision is also logarithmic:

The eye senses brightness approximately logarithmically over a moderate range (but more like a power law over a wider range), and stellar magnitude is measured on a logarithmic scale.[14] This magnitude scale was invented by the ancient Greek astronomer Hipparchus in about 150 B.C. He ranked the stars he could see in terms of their brightness, with 1 representing the brightest down to 6 representing the faintest, though now the scale has been extended beyond these limits; an increase in 5 magnitudes corresponds to a decrease in brightness by a factor of 100.[14] Modern researchers have attempted to incorporate such perceptual effects into mathematical models of vision.[15][16]

So many experiments have revealed logarithmic responses to stimuli that someone has formulated a mathematical “law” on the matter:

Of course, this still doesn’t answer the question of how people develop the ability to count past 3, but this is getting long, so we’ll continue our discussion next week.

5 thoughts on “Anthropology Friday: Numbers and the Making of Us, part 2”