Skip to content
HomeBook Review: Aphrodite and the Rabbis 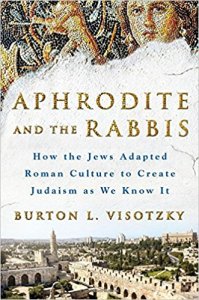 When I started researching Judaism, the first thing I learned was that I didn’t know anything about Judaism. It turns out that Judaism-in-the-Bible (the one I was familiar with) and modern Judaism are pretty different.

Visotzky’s Aphrodite and The Rabbis: How the Jews Adapted Roman Culture to Create Judaism as we Know it explores the transition from Biblical to Rabbinic Judaism. If you’re looking for an introductory text on the subject, it’s a good place to start. (It doesn’t go into the differences between major modern-day Jewish groups, though. If you’re looking for that, Judaism for Dummies or something along those lines will probably do.)

I discussed several ideas gleaned from this book in my prior post on Talmudism and the Constitution. Visotzky’s thesis is basically that Roman culture (really, Greco-Roman culture) was the dominant culture in the area when the Second Temple fell, and thus was uniquely influential on the development of early Rabbinic Judaism.

Just to recap: Prior to 70 AD, Judaism was located primarily in its homeland of Judea, a Roman province. It was primarily a temple cult–people periodically brought sacrifices to the priests, the priests sacrificed them, and the people went home. There were occasional prophets, but there were no rabbis (though there were pharisees, who were similar.)  The people also practiced something we’ll call for simplicity’s sake folk Judaism, passed down culturally and not always explicitly laid out in the Mosaic Law. (This is a simplification; see the prior post for more details.)

Then there were some big rebellions, which the Romans crushed. They razed the Temple (save for the Western Wall) and eventually drove many of the Jews into exile.

It was in this Greco-Roman cultural environment, Visotzky argues, that then-unpracticeable Temple Judaism was transformed into Rabbinic Judaism.

Visotzky marshals his arguments: Jewish catacombs in Rome, Talmudic stories that reference Greek or Roman figures, Greek fables that show up in Jewish collections, Greek and Roman words that appear in Jewish texts, Greco-Roman style art in synagogues (including a mosaic of Zeus!), the model of the rabbi + his students as similar to the philosopher and his students (eg, Socrates and Plato,) Jewish education as modeled on Greek rhetorical education, and the Passover Seder as a Greek symposium.

Allow me to quote Visotzky on the latter:

The recipe for a successful symposium starts, of course, with wine. At least three cups, preferably more, and ideally you would need between three and five famous guests. Macrobius describes a symposium at which he imagined all the guests drinking together, even though some were already long dead. They eat hors d’oeuvers, which they dip into a briny sauce. Their appetite is whetted by sharp vegetables, radishes, or romaine lettuce. The Greek word for these veggies is karpos. Each food is used as a prompt to dig through one’s memory to find apposite bookish quotes about it. … Above all, guests at a symposium loved to quote Home, the divine Homer. …

To kick off a symposium, a libation was poured to Bacchus Then the dinner guests took their places reclining on pillows, leaning on their left arms, and using their right hands to eat. Of course, they washed their fingers before eating their Mediterranean flatbreads, scooping up meats and poultry–no forks back then.

Athenaeus records a debate about desert, a sweet paste of fruit, wine, and spices. Many think it a nice digestive, but Athenaeus quotes Heracleides of Tarentum, who argues that such a lovely dish ought to be the appetizer, eaten at the outside of the meal. After the sumptuous meal and the endless quotation of texts… the symposium diners sang their hymns of thanksgiving to the gods. …

All of this should seem suspiciously familiar to anyone who has ever attended a Passover Seder. The traditional Seder begins with a cup of wine, and blessings to God are intoned. Then hands are washed in preparation for eating the dipped vegetables, called karpos, the Greek word faithfully transliterated int Hebrew in the Passover Haggadah. Like the symposiasts, Jews dip in brine. The traditional Haggadah recalls who was there at the earliest Seders: Rabbi Eliezer … Rabbi Aqiba, and Rabbi Tarphon (a Hebraized version of the Greek name Tryphon). The converation is prompted by noting the foods that are served and by asking questions whose answers quote sacred scripture. …

Traditionally the Passover banquet is eaten leaning on the left side, on pillows. Appetites are whetted by bitter herbs and then sweetened by the paste-like Haroset (following the opinion of Heracleides of Tarentum?) Seder participants even scoop up food in flatbread. Following the Passover meal there are hymns to God.

Vigotzsky relates one major difference between the Greek and Jewish version: the Greeks ended their symposiums with a “descent into debauchery,” announced api komias–to the comedians! Jews did not:

Indeed, the Mishnah instructs, “We do not end the meal after eating the paschal lamb by departing api komias.” That final phrase, thanks to the Talmud of Jewish Babylonia, where they did not know Greek, has come to be Hebraized as “afi-komen,” the hidden piece of matzo eaten for desert.

The one really important piece of data that he leaves out–perhaps he hasn’t heard the news–is the finding that Ashkenazi Jews are genetically about half Italian. This Italian DNA is primarily on their maternal side–that is, Jewish men, expelled from Judea, ended up in Rome and took local wives. (Incidentally, Visotzky also claims that the tradition of tracing Jewish ancestry along the maternal line instead of the paternal was adopted from the Romans, as it isn’t found in the Bible, but is in Rome.) These Italian ladies didn’t leave behind many stories in the Talmud, but surely they had some effect on the religion.

On the other hand, what about Jews in areas later controlled by Islam, like Maimonides? Was Rome a major influence on him, too? What about the Babylonian Talmud, written more or less in what is now Iraq?

Modern Christianity owes a great deal to Greece and Rome. Should modern Judaism be understood in the Greco-Roman lens, as well?

18 thoughts on “Book Review: Aphrodite and the Rabbis”